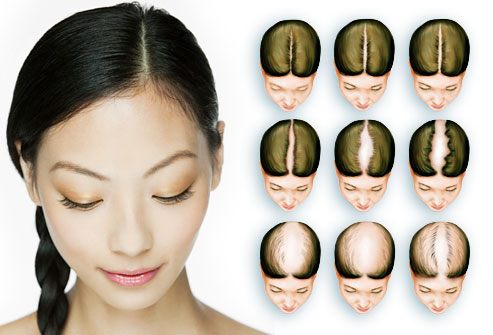 There are several things that trigger hair loss, including our genetic make-up, diet, hormonal changes within the body, medication, illness, infection, or chemicals. All these things have the potential to stop hair from being formed properly.

Hair depicts style and personality in women. Unfortunately, 40% of people who go through temporary or long-term hair loss are women.

Female pattern hair loss (FPHL) is the commonest cause of hair loss in women. It is characterised by decrease in hair density over the frontal scalp and crown while retaining the frontal hairline.

CAUSES OF HAIR LOSS IN WOMEN

The cause for female pattern baldness is thought to be related to aging, hormones and genetics. It can be a result of strong genetic predisposition. Another factor that contributes is hormones. With changes in the androgens (male hormones) after menopause, many women feel that the hair on their head is thinning.

In female pattern baldness the symptoms are:

Additionally, there are three different pattern of hair loss seen, which are:

Homoeopathy is safe and has proven efficacy in treating hair and scalp problems in women. Homoeopathy aims to treat the whole person, depending on a multitude of factors, such as the personality of the individual, their state of mind and lifestyle rather than just the physical or apparent symptoms.

These tips may help control or prevent hair loss:

DISCLAIMER : Our Patient testimonials are genuine gems collected over the years of various doctors of our multispecialty team. Some of the doctors have moved on in life but our dental services remain unmatched.